So I was at work on Saturday and as I get out of one appointment I find out that my last appointment of the day will be with a celebrity that I really admire.  Seeing as I get tongue tied when talking to strangers- I was praying that I didn't come off as a spaz.  As the session progressed my jewelry came up in the conversation.  Normally I have a bunch of stuff to show with me.  The first thing I do when I get to work is pull out whatever I  made that week and show my friend Rene.  Not that day. Anyways... the only thing I had to show was my favorite necklace.  It is a huge rectangular piece of Dendritic Agate set in silver.  It looks like a window with a beautiful view of a "tree" in it.  She really liked it and as she was admiring it I had an overwhelming feeling that she "needed"it and should have it. So I gave it to her.  Is that crazy?  After I did that was like "Ruby- what did you just do?" I definitely miss it as I wore it everyday.

This morning I looked up the meaning of the stone. Dendritic Agate is one the most powerful and protective stones for travelers. It protects the wearer from accident and fatigue during travel.  She has been doing a crazy amount of flying.  Now knowing the meaning of the stone I feel so much better that I gave it away.  It was like the stone knew that someone needed it more than me.
Posted by Nemesis Jewelry at 10:28 AM

Email ThisBlogThis!Share to TwitterShare to FacebookShare to Pinterest
Labels: celebrities 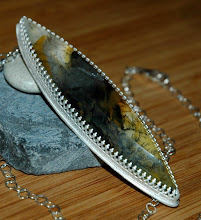